Skip to content
This is the start of my office rennovation.  The room serves multiple purposes.  My office, project room (mostly electronics, foam work, etc), workout room (hence the bike, floormats, and TRX), entertainment room (hence the projector and screen), and to display collectibles.

I have been collecting much of this stuff for a long time (at least since 1997).  Many of the Star Wars toys are from friends or friends collections that I purchased or purchased in stores for my kids.  Some of the Battlestar Galactica items were purchased from friends collections. The Firefly items I purchased at conventions.  The few Star Trek items were purchased at conventions or given to me by friends. There is a sonic screwdriver. The MASK toys were purchased via ebay – I went through a three month phase where I bought every lot of MASK toys on ebay. I eventually sold the boxed sets and kept the best complete sets (sans boxes) for myself.  I still have a few items I’ll eventually sell.

The paper products (books, etc) I don’t know how I’m going to display yet.  I’ve got several ideas of my own and have been given a few ideas including scanning in the covers or the whole works and having them displayed in a moving picture of some sort. Another idea is to scan everything in and have them on a tablet device that people can look through. I’ve also thought maybe framing some of them in a way that I can remove them from the frame. I don’t know how I’m going to do it, yet.

The unframed pictures will eventually be framed for display and arranged differently.

The eventual look of this room will be the Serenity Kitchen you can see some photos of it in this https://www.flickr.com/photos/lee_stringer/sets/72157623219903652/page1 – I’ll have to figure out how to arrange the displays after I figure out how I’m going to do the room.  I’ve thought about putting the shelves up and then having massive drop banners made that look like the interior of the kitchen and then adding a way to roll them up to show the collection… I think that’s a bit much, but anything is on the table right now.

I’m not sure exactly how I’m going to layout the room. I know I want it to be the yellow color of the kitchen/lounge on Serenity.  I really wanted to get some aircraft containers to put on one of the walls to store items in for hosting parties.  I am now thinking of a facade of container covers to look like the one in the kitchen.

A lot of  Firefly/Serenity props will be made to go in this room.

The workbench you see (covered in tape measures and books, next to full trash cans) will eventually be replaced by a moving table to replicate the one on Serenity.  The ceiling will be blue/black and have some windows like Serenity and the end where the TV is will have a hatchway put up with steps that don’t go anywhere. I’ll have a large print made to go in the doorway to show the hall and engine room.

The entertainment portion and the consoles will go into a cabinet hidden from view. I’m not sure how I’m going to do that, yet either, but I’m drawing up ideas.  I’ll draw up my ideas then figure out something practical and then I’ll build the room and put the stuff back.  My daughter is anxious to organize all of the items by show/movie… until then there’ll just be this jumble on the shelving.

A few other items that are out of place.  There is a plate with a star and santa.  This plate I made in 1983 (I was 8) for my grandmother.  On the back it says “To gramma” from my full name… like she wasn’t going to know who made it if I’d just put my first name.  There is a picture of my son racing his first BMX Grand National (he also won that year). There are also some birthday and father’s day cards from my kids.

I’m not sure what I’m going to do with my iMac, yet.  And I have no pictures of my office area… it’s just a desk next to with a bike on a mag trainer with a fit desk.  I also have an elliptical to figure out where to put.

I’ve waited a long time to get this far.  Until these shelves were put up all of this stuff was in boxes in a storage room so I didn’t know how much stuff I actually had… there’s a lot more here than I thought. I’m very happy with how this is all shaping up. It’s taken five years to get to the point of putting up shelves. I hope it doesn’t take another 5 years to finish. 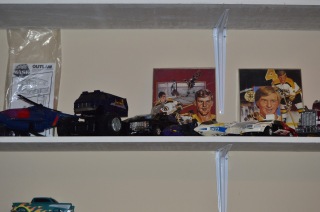 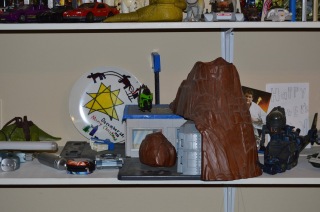 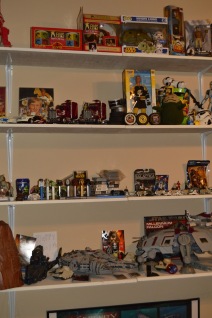 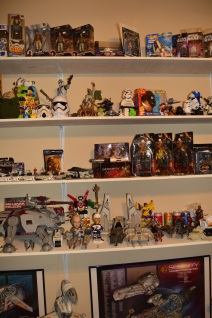 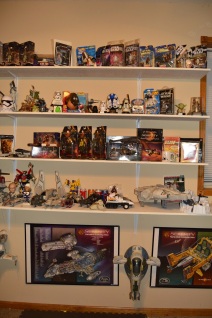 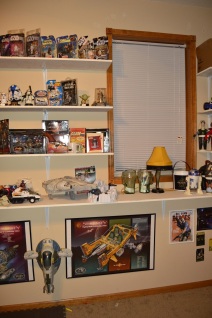 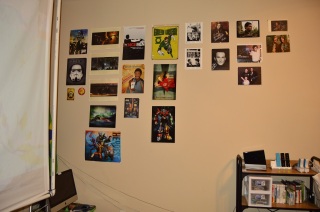 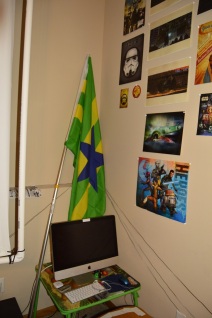 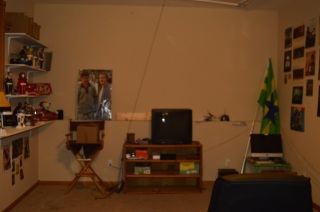 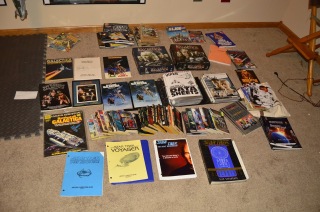 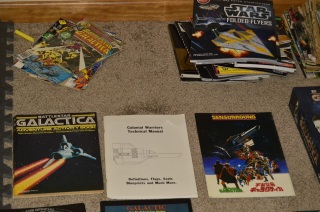 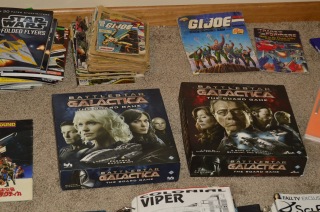 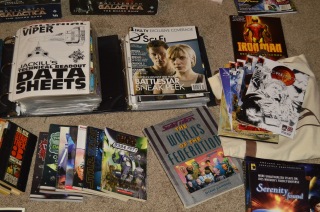 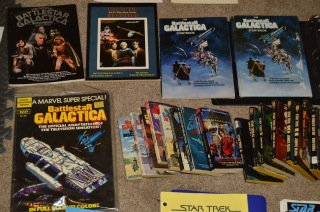 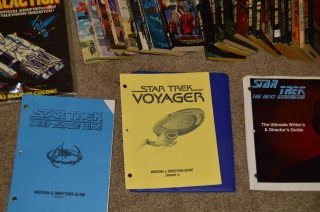 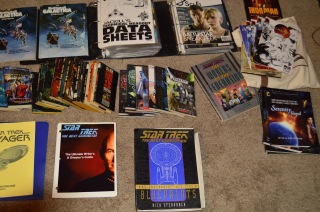